Coronation of the last king of Hungary: Charles IV 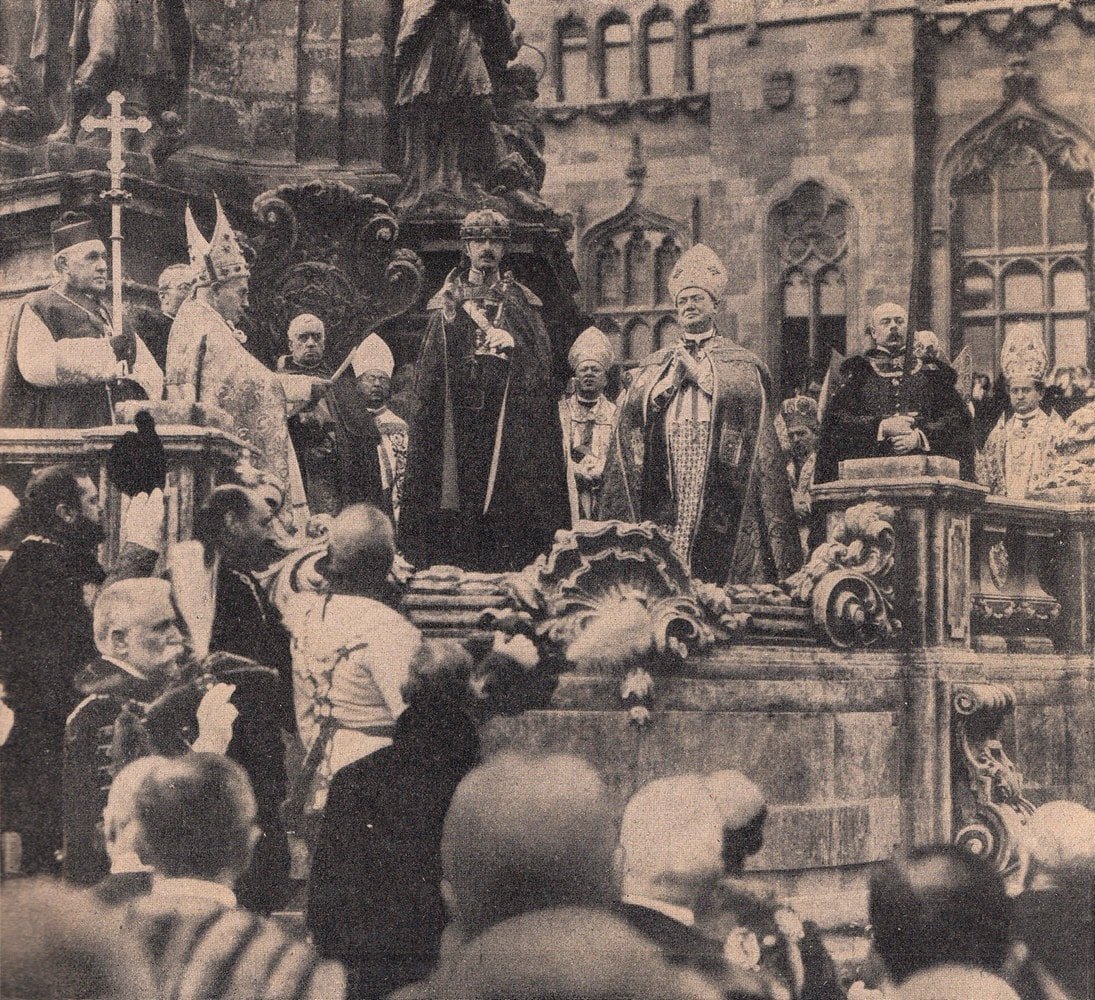 From the coronation of Emperor Carl as King of Hungary: The oath on the Holy Trinity Column square in front of the Matthias Church in Budapest. December 30, 1916
Recordings of the Mil. Film & Photo Point (M. F. & F.)

Charles succeeded to the thrones in November 1916 after the death of his grand-uncle, Emperor Franz Joseph. On 2 December 1916, he assumed the title of Supreme Commander of the whole army, succeeding Archduke Friedrich. His coronation as King of Hungary occurred on 30 December. In 1917, Charles secretly entered into peace negotiations with France. He employed his brother-in-law, Prince Sixtus of Bourbon-Parma, an officer in the Belgian Army, as intermediary. However, the Allies insisted on Austrian recognition of Italian claims to territory and Charles refused, so no progress was made.[1] Foreign minister Graf Czernin was only interested in negotiating a general peace which would include Germany, Charles himself went much further in suggesting his willingness to make a separate peace. When news of the overture leaked in April 1918, Charles denied involvement until French Prime Minister Georges Clemenceau published letters signed by him. This led to Czernin's resignation, forcing Austria-Hungary into an even more dependent position with respect to its seemingly wronged German ally.[2]

The Austro-Hungarian Empire was wracked by inner turmoil in the final years of the war, with much tension between ethnic groups. As part of his Fourteen Points, U.S. President Woodrow Wilson demanded that the Empire allow for autonomy and self-determination of its peoples. In response, Charles agreed to reconvene the Imperial Parliament and allow for the creation of a confederation with each national group exercising self-governance. However, the ethnic groups fought for full autonomy as separate nations, as they were now determined to become independent from Vienna at the earliest possible moment.

The new foreign minister Baron Istvan Burián asked for an armistice 14 October based on the Fourteen Points, and two days later Charles issued a proclamation that radically changed the nature of the Austrian state. The Poles were granted full independence with the purpose of joining their ethnic brethren in Russia and Germany in a Polish state. The rest of the Austrian lands were transformed into a federal union composed of four parts: German, Czech, South Slav, and Ukrainian. Each of the four parts was to be governed by a federal council, and Trieste was to have a special status. However, United States Secretary of State Robert Lansing replied four days later that the Allies were now committed to the causes of the Czechs, Slovaks and South Slavs. Therefore, autonomy inside the Empire for the nationalities was no longer enough. In fact, a Czechoslovak provisional government had joined the Allies 14 October, and the South Slav national council declared an independent South Slav state 29 October 1918.